"It's just a bridge, what is there to photograph?"
"It's the Golden Gate Bridge!!"
"So? It's just another bridge, and we have way bigger and more magnificent bridges in our country which surpass this bridge anytime"

Those were the words I heard in an exchange between an elderly couple standing less than ten feet away from me; as the wife was bouncing with enthusiasm and excitement upon the sight of the Golden Gate Bridge upon descending from their bus, desperately trying to get the best shot of the bridge from every angle, the husband stuck his hands into his pockets and watched with an expression of boredom and disinterest.

Well, in my own response To the elderly sir, there may be many bridges around the world, but your wife is definitely not wrong that this is THE Golden Gate Bridge, the iconic and world-recognized emblem which best represents the famous city of San Francisco in the United States of America. 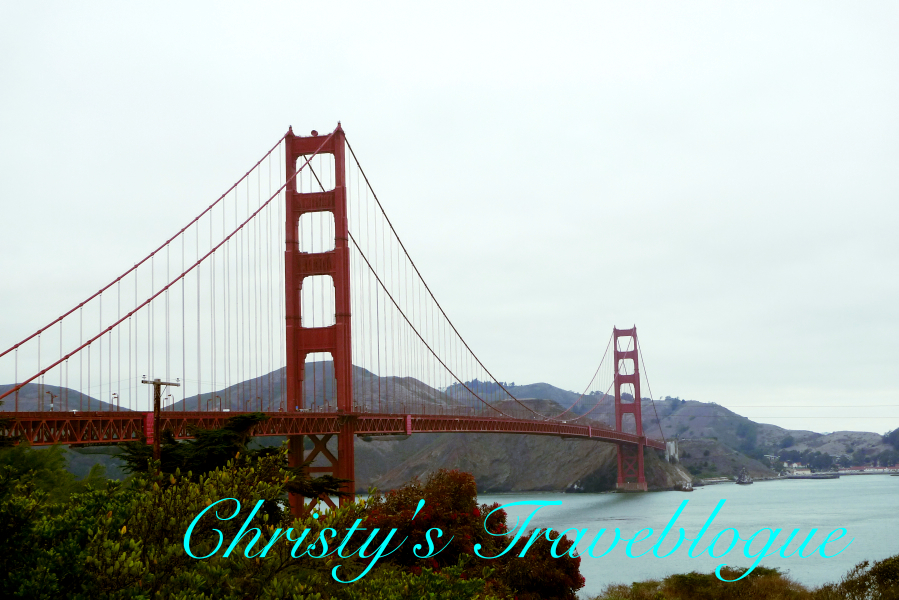 The Golden Gate Bridge is synonymous with the term San Francisco as the very image of this bridge pops up by default when the name of the city is mentioned.
Yes, such is the power of this iconic bridge, which has, for decades, captured the hearts and attention of the world since its official launch in the year 1937.

In fact, some travel guide books; namely Frommers, referred to this very bridge as "possibly one of the most beautiful and certainly the most photographed bridge in the world".

The unmistakable bold red metal colors of the suspension bridge is simply a symbol or a representation of the city; and a sight to behold as one enters this; one of the most populous city in the United States, as can be seen in most images or postcards related to San Francisco. 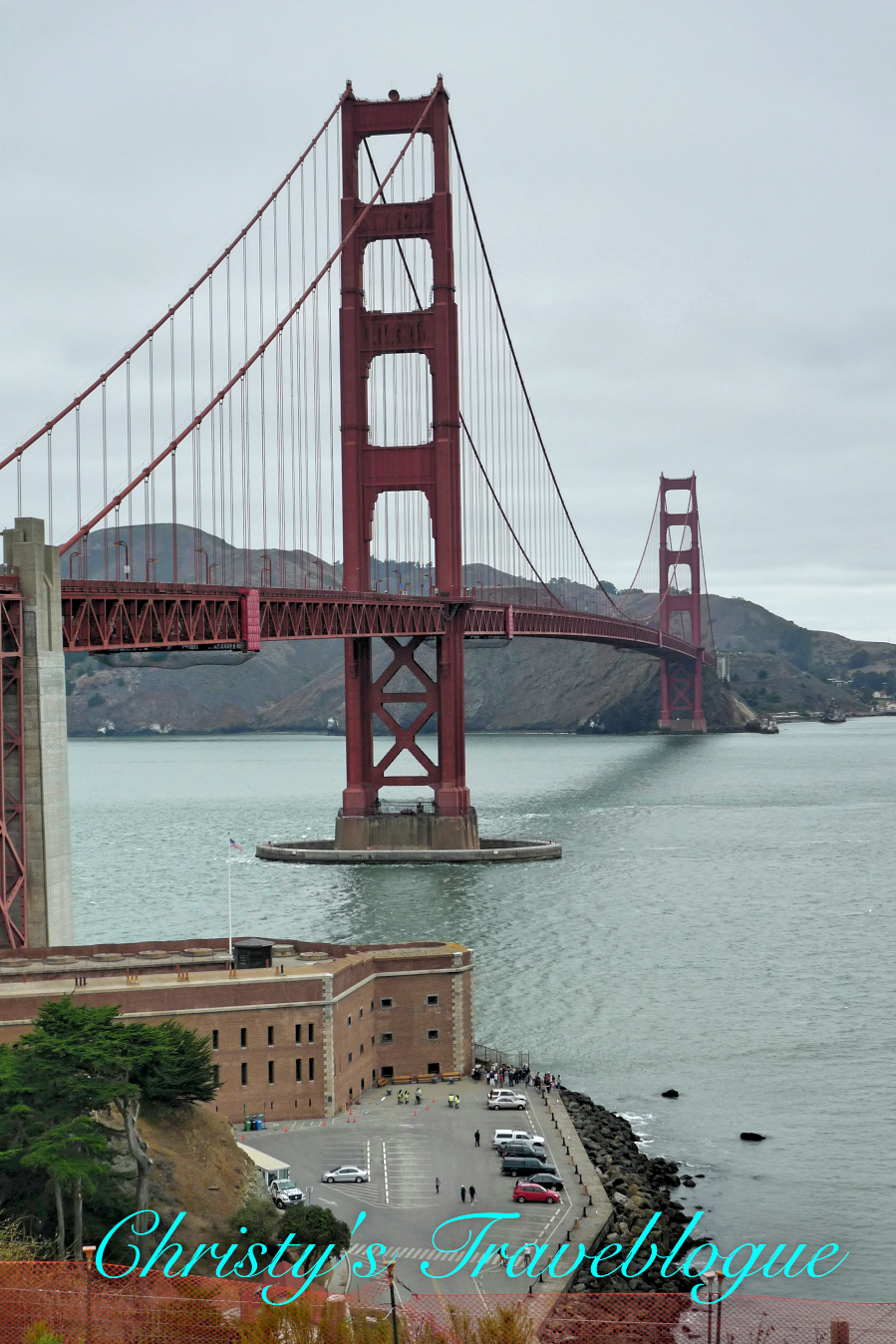 It is definitely not just any bridge; it is almost as if the bridge is San Francisco itself; being such an icon of fame and world-renowned status.

There is much for Golden Gate Bridge to be the pride of San Francisco (and even the United States as well); with it being declared as one of the Wonders of the Modern World by the American Society of Civil Engineers - Wikipedia)

Golden Gate Bridge was also named the world's longest suspension bridge main span; with its length of 4,200 feet (1,300m) - a title it held for at least three decades since its opening until the year 1964 when it was succeeded by ten other bridges in the world, and now holds the second longest suspension bridge in the United States; right after New York City's Verrazano-Narrows Bridge.

The famous suspension bridge spans across the Golden Gate Straits connecting both the San Francisco Bay and the Pacific Ocean; linking the city of San Francisco from its northern peninsula to Marin County.  Its establishment resorts to solve the commuting woes for the early settlers between the Marin County to San Francisco; whereby the only mode of transportation was via boat as they transport water to the city of San Francisco.
The early conception of the bridge as a commuting option posed many challenges to the engineering as the strait commanded strong currents and tidal waves, along with the savaging winds and the depth of the water which made it a difficult and near-impossible mission with their then-technology. Fogs were also common problem plaguing the strait which added to the difficulty of the construction of the bridge.

A former engineering student, James Wilkins' proposal made it through, and Joseph Strauss, an avid engineer and poet, was then tasked to the alteration of the design with his background and experience working on other bridges (his graduate thesis was on a railroad bridge across the Bering Strait).
The progressive findings on metallurgy then paved the way for the concept of a suspension bridge; which was the most practical idea at that time.

The conceptualization till the establishment of the famous bridge spanned for a decade; facing oppositions as well from various parties, with concerns raised on the risks of the bridge posing a hazard to the marine traffic and also the potential of ship collision or causing obstruction to the main harbors for the navy defense.
However, its construction finally made it through, or we would not be witnesses to the world-famous bridge today.

The name of the Golden Gate Bridge was coined way before the bridge even began its construction or design; when it was discussed in the year 1917, by Strauss and city engineer of San Francisco, M.M. O Shaughnessy and was then officially legalized in the year 1923 with the passing of the Golden Gate Bridge and Highway District Act by the state legislation.

Pedestrians and cyclists are also fond of this iconic landmark, and designated lanes have been included on both sides of the bridges for them to enjoy the walk and ride down the bridge. While initially the two-way traffic lanes were separated by only metal curbs, railings were then added to prevent the cyclists from slipping onto the roadways. 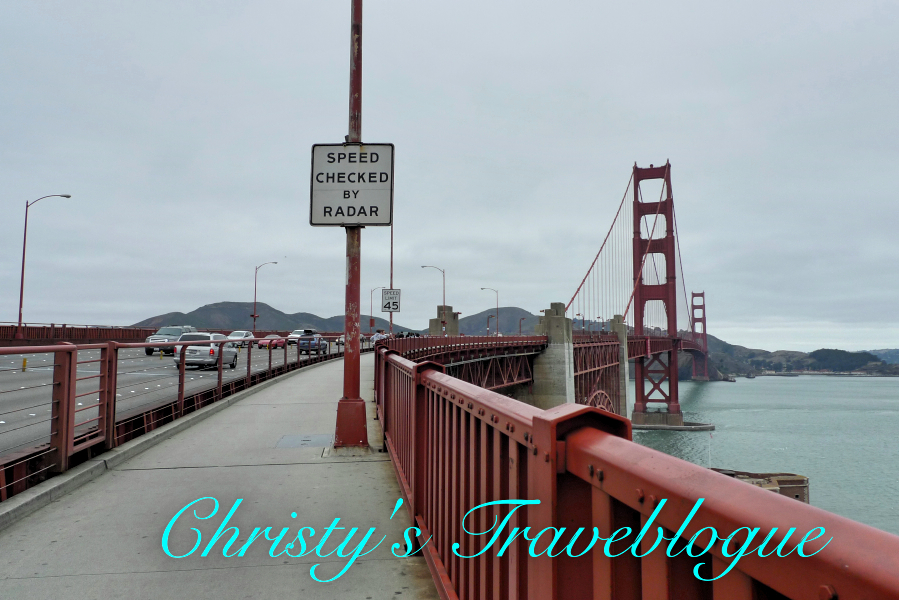 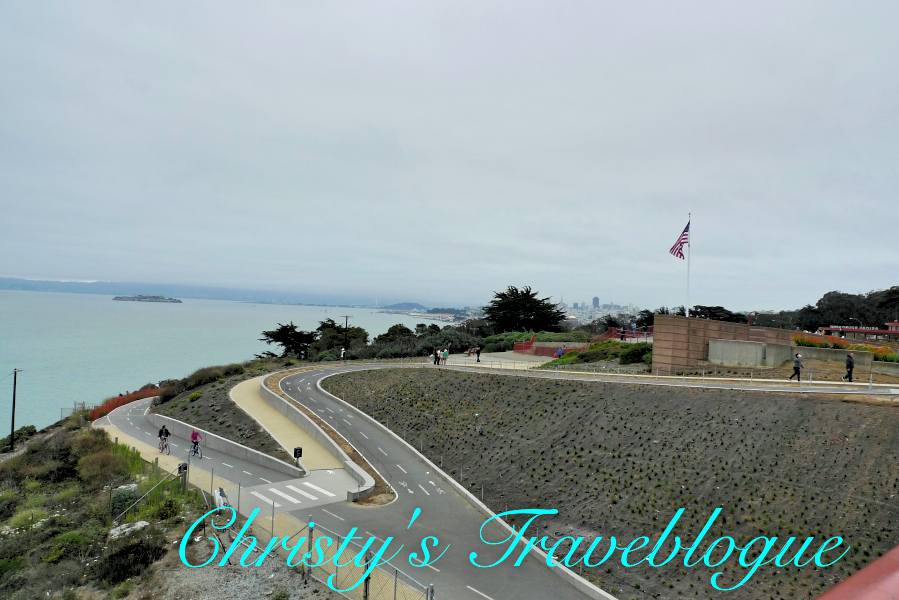 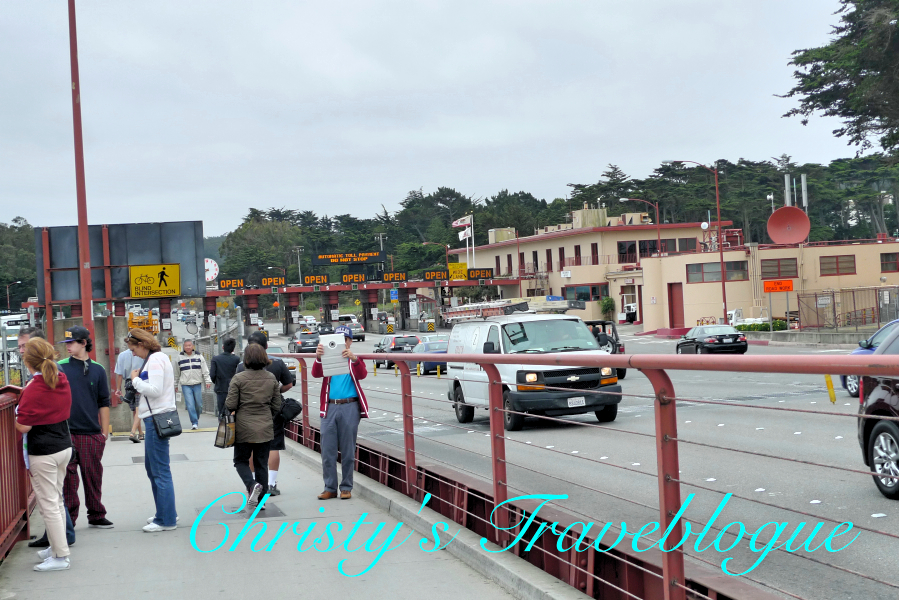 Golden Gate Bridge is command center of tourism for the city of San Francisco, and there is no one who will be seen skipping this landmark off their sightseeing list when in the city, as it is almost a huge no, to have not visited this bridge which is internationally recognized as the iconic symbol of the the city itself.
Tour buses and cars flock to the Golden Gate area; to catch a glimpse, and like the couple described above in my opening, to photograph themselves and of the much celebrated bridge. 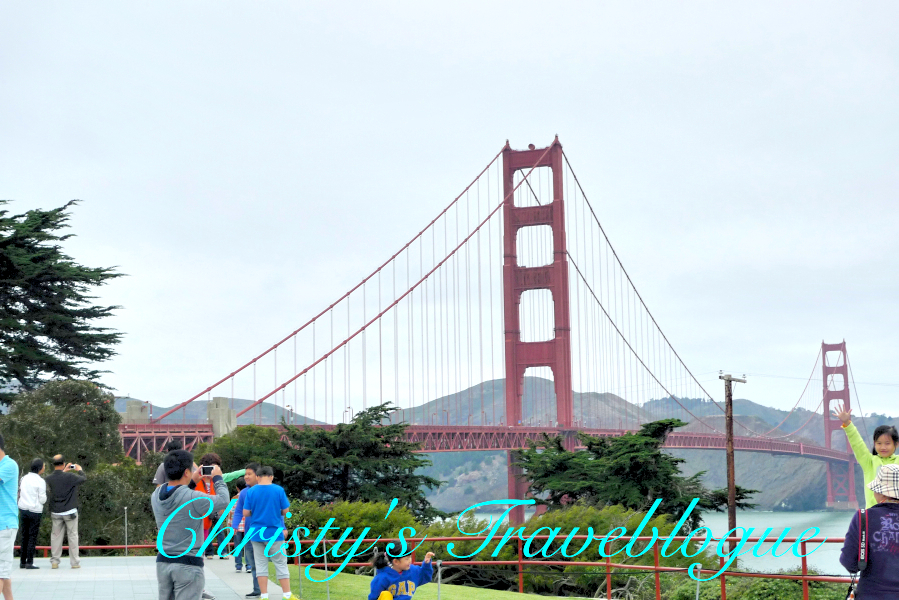 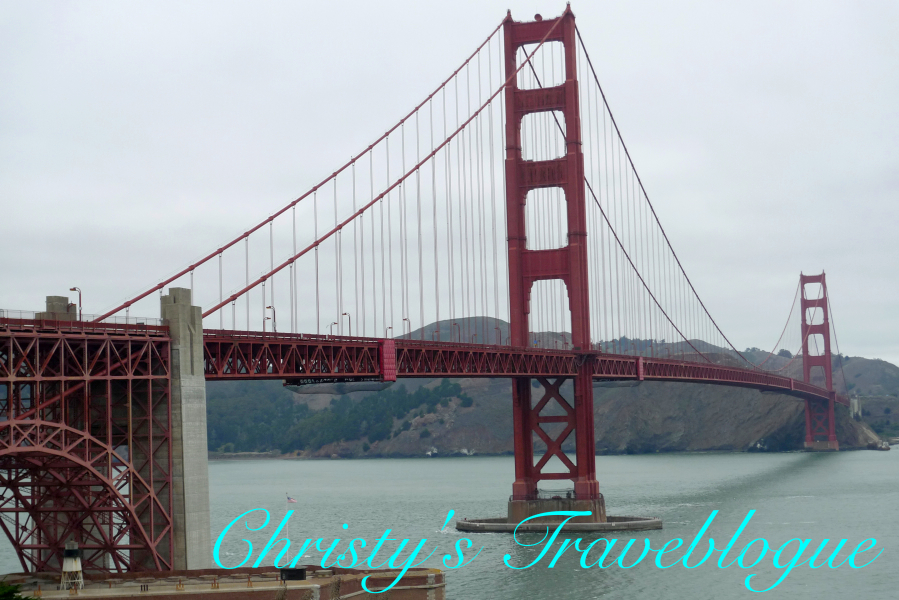 One can also spot the statue of the legendary Joseph Strauss; the brilliant designer who was responsible behind this world renowned suspension bridge. 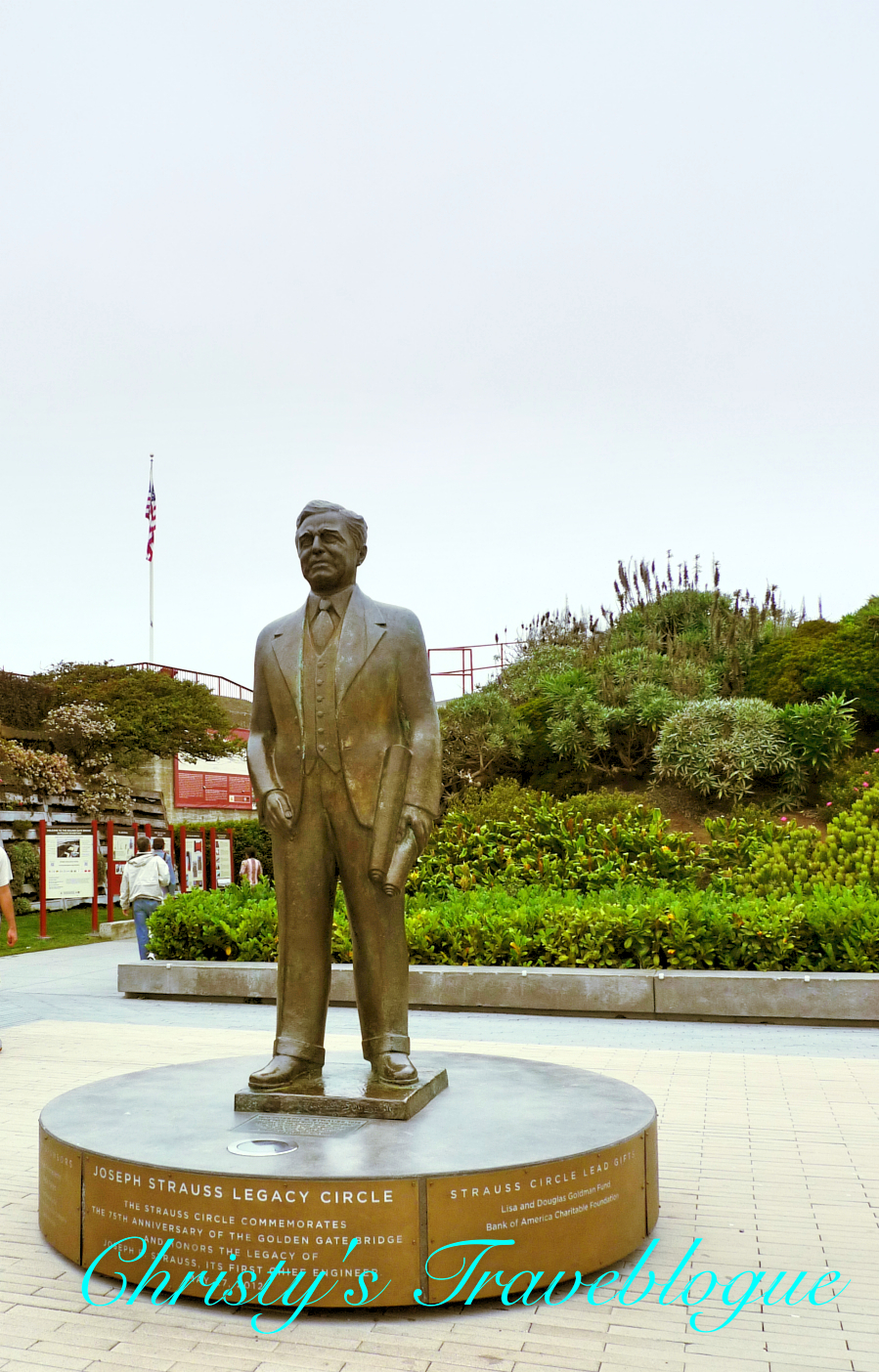 The bridge stands as an icon of the city of San Francisco, with views of the city and also a speck in the background which is the famous Alcatraz Island (where the prison was once situated). 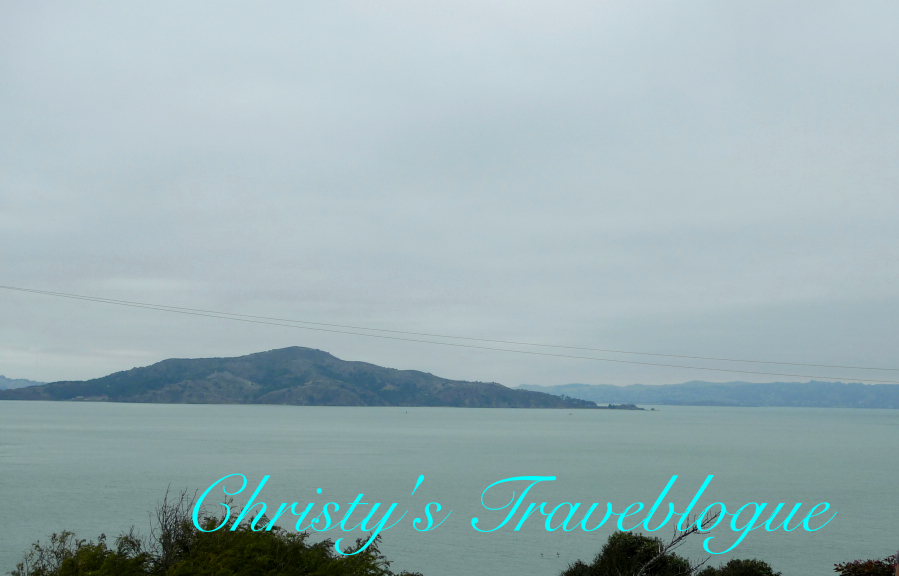 Having been featured in one too many media; from films, movies, books, it goes to show that the world can never get too much of the characteristic bridge.

The Golden Gate Bridge is the picture of San Francisco, in all its stark contrast of bold red standing in might and dignity; painting that picture perfect postcard for the famous city.

With all its dues, Golden Gate Bridge is definitely a star. 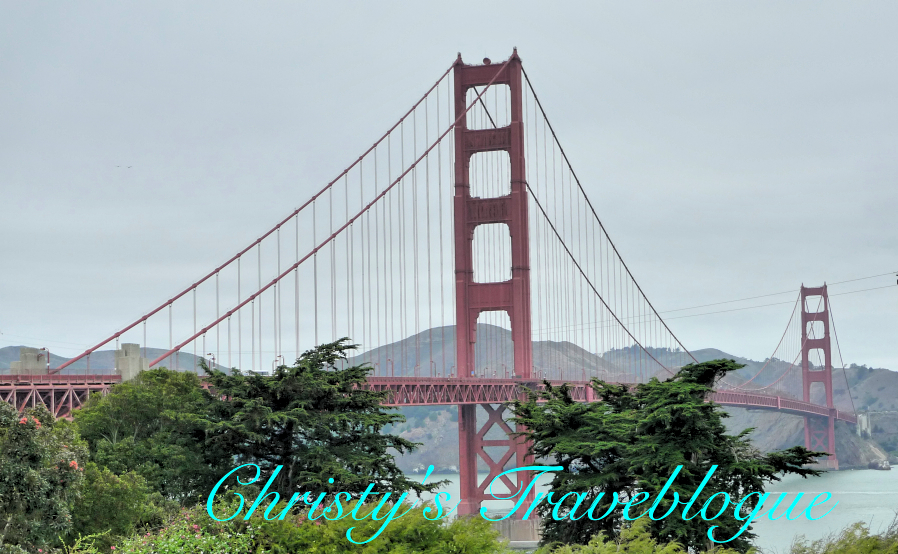 That Is why, My dear sir, this is not just any bridge :-)