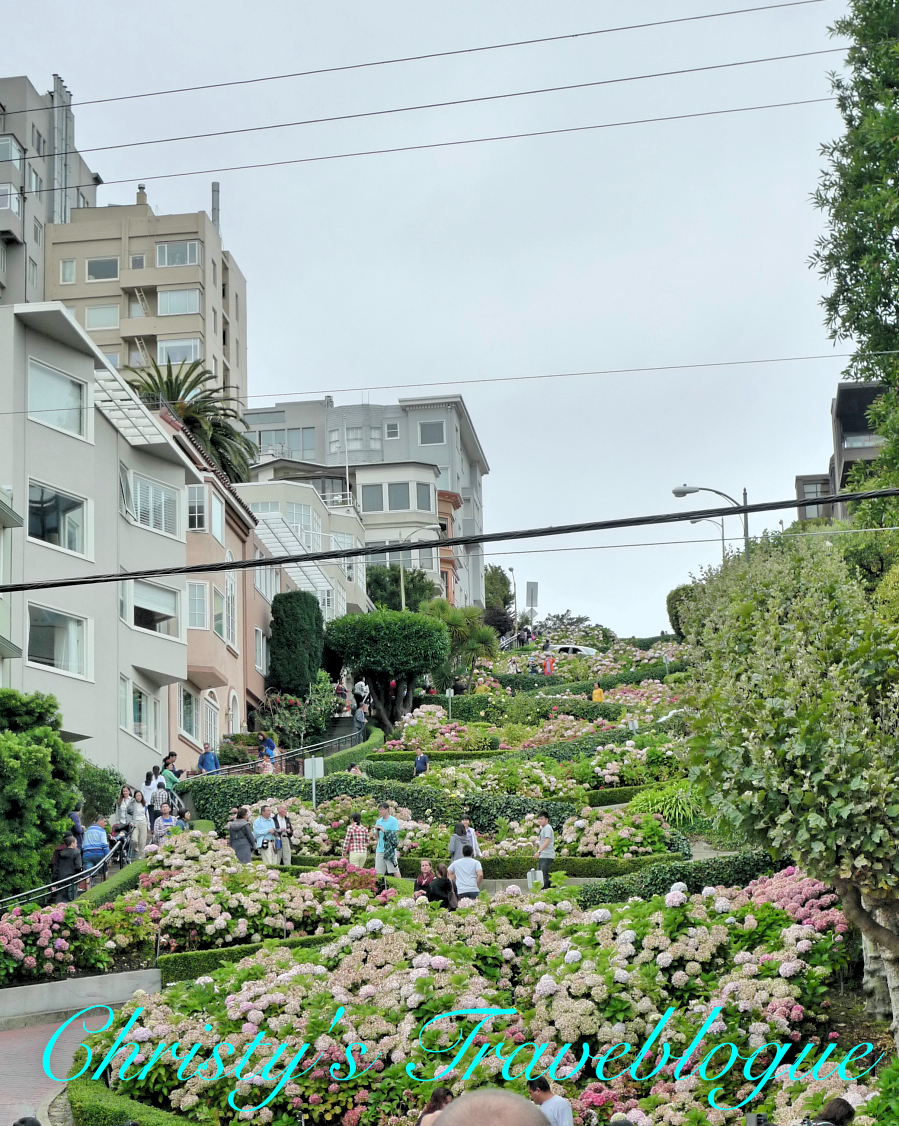 If you have seen a shot of the above in any travel sites or books/magazines, chances are you have heard of and known of this famous street in San Francisco.

Dubbed "The Most Crooked Street" or "The Crooked Street in San Francisco", this is definitely one of the most unique and interesting landmark in the city; after the famous iconic landmark of the Golden Gate Bridge, that is. 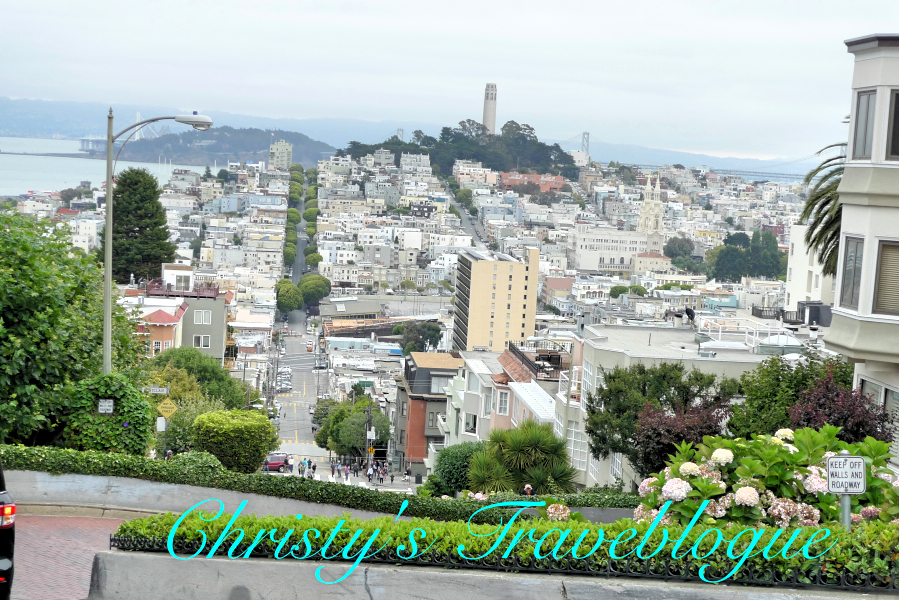 Lombard Street is not purely this single street, as it spans from the east to the west of San Francisco, covering the major junction of US Route 101. The Street spans from the western terminus at the Presidio to the east; the Cow Hollow neighborhood and continuing from the Russian Hill to the Telegraph Hill where it breaks off to Telegraph Hill Boulevard; Pioneer Park and Colt Tower and picks up again at Winthrop Street. Its end point rests on The Embarcadero. 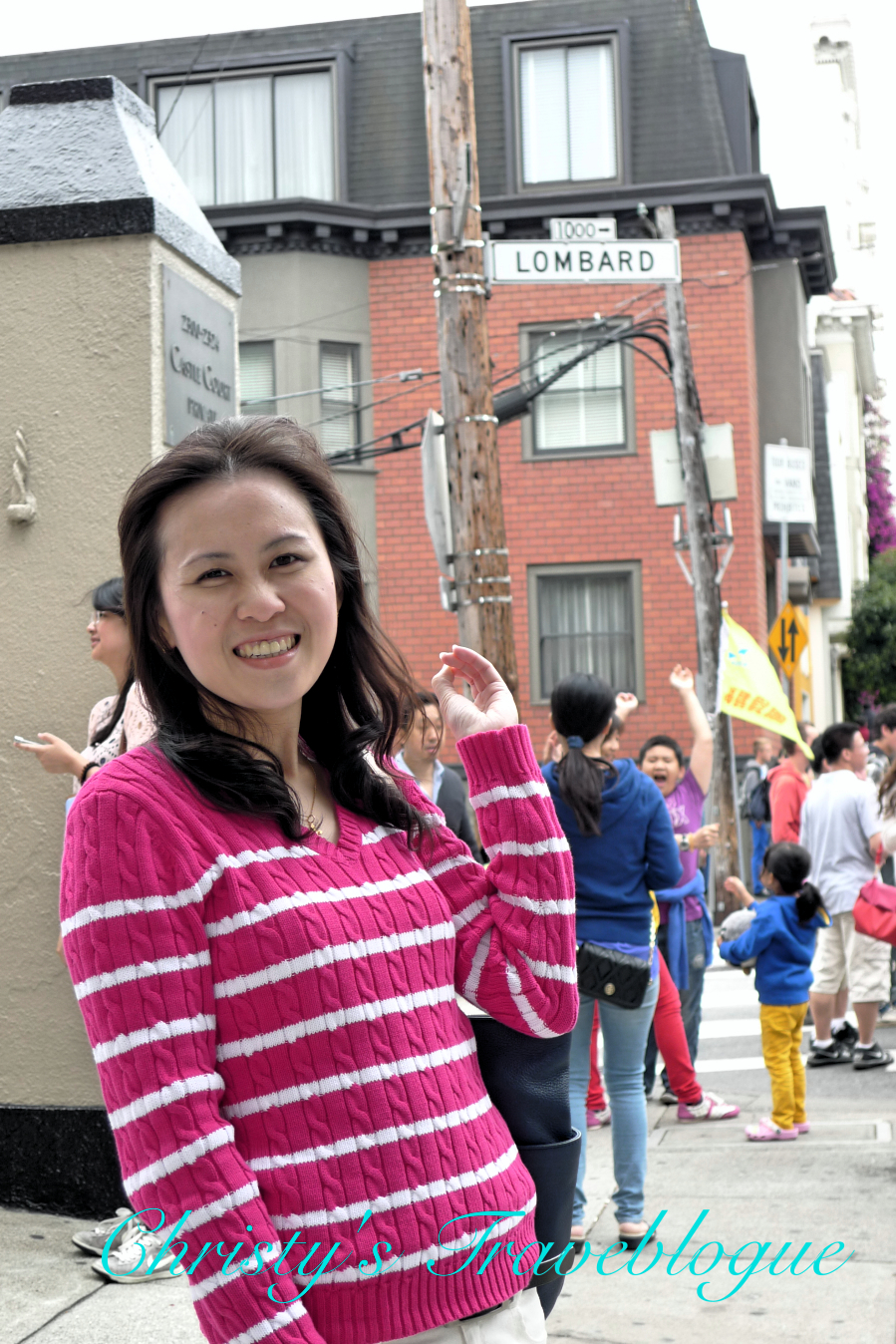 The famous point of this street is the Lombard Street's one-way block on Russian Hill, known for its steep and curvaceous gradient featuring eight hairpin turns; tightly so, is a challenge for drivers as one takes a plunge down this bend. For the local residents however, needless to say, they are just too used to the road that there is no longer any element of fascination in it; or maybe not so true.

The street's rising popularity despite its early establishment in the year 1922 is attributed to its unique twists and turns as a vehicle makes its way in a zig-zagging manner around the turns and bends of this interesting street. The street was in fact, a solution for the precipitous gradient of the hill itself; which at a 27% was too steep for the most vehicles, posing high risks to the safety of the drivers and even pedestrians, not to mention the danger it posed to the wheel chairs, making it uncomfortably hazardous to most of the users.
The inclusion of the bends and turns; while still appearing to be challenging, is designed to curb and minimize the risk of the vehicles taking a sharp dive as they brake and navigate cautiously around the bends. 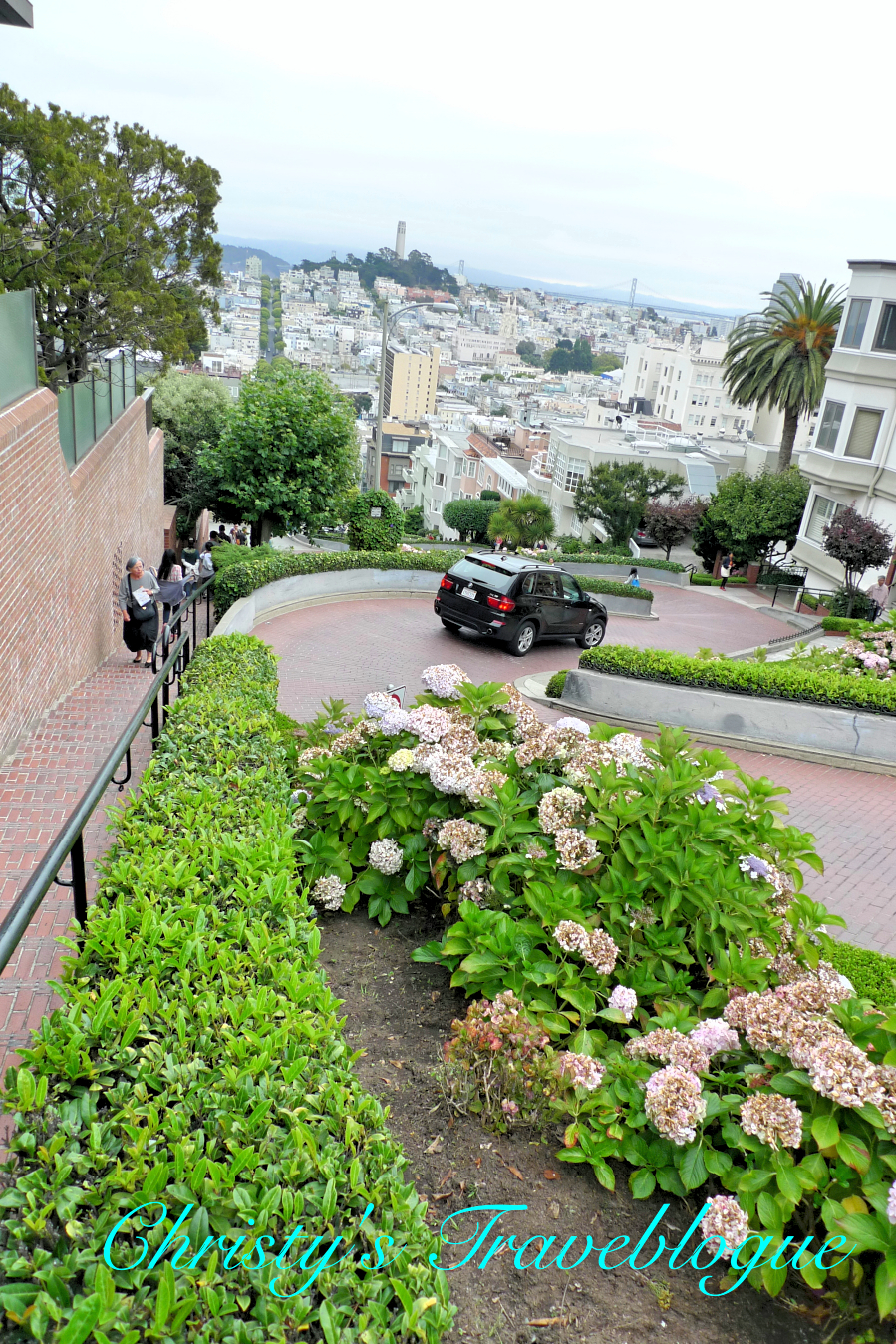 The brainchild of the property owner, Carl Henry, the street was then constructed in 1922, is one-way traffic road heading downhill (naturally so), with a length of 600 feet (180m).

Paved with red bricks and decorated with the beautiful garden blooms, Lombard Street's Russian Hill neighborhood where this sloped-driveway is located, quickly became the most prominent neighborhood streets with its unique attributes and catapulted into stardom in the world; drawing tourists from all over the globe swarming the neighborhood hoping to catch a glimpse of this much-acclaimed street.

The neighborhood is no longer enjoying their quiet moments, definitely, I can attest to that, as tourists, and people are all just crowding around the area to snap a few shots of this unique street which is definitely one of its kind in the world.
If the street is not occupied with its own nicknames to fill its own guest book, there is one more to add to the list as one of "The Crookedest Streets in the World"; and not just in San Francisco or United States alone.

The best way to experience this famous downhill slope way of Lombard Street is to take a drive in your car to navigate around the eight hairpin turns; taking each one at a time to delve in that surreal experience but it was definitely worth it. 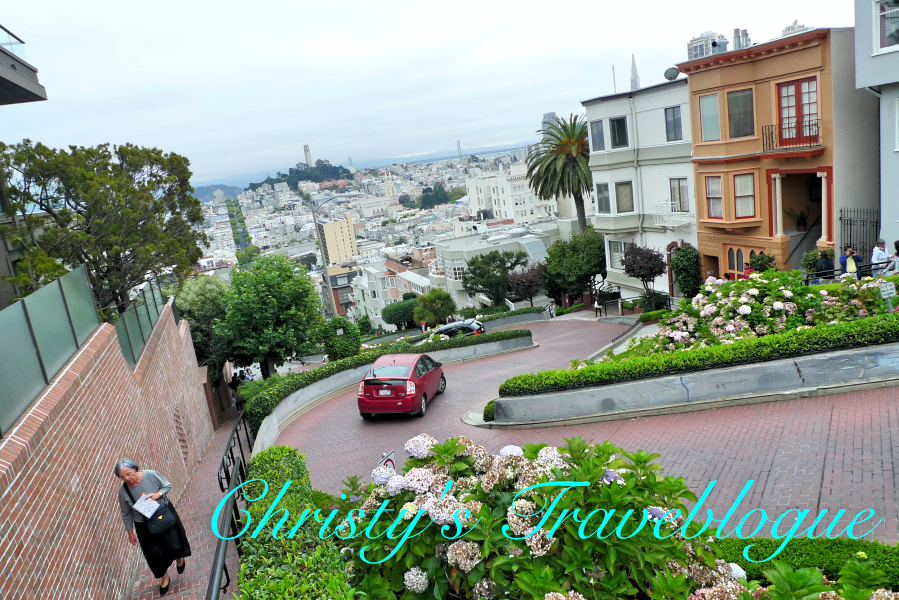 Taking a good shot of the street can be a challenge; wrestling the crowds and also the angle (which, provided you can disperse the crowds hovering impatiently near you as you take each shot).
An aerial view would be ideal; or from afar, to get those cables out of sight (as mine had so unfortunately included). One of the best location, and most recommended would be from Colt Tower which provided a complete and ideal view of this one-way drive.

Flowers in bloom, cars appearing like miniatures on the bends, and the red bricks make this part of Lombard Street seem like a fictional and imaginary land which only exists in story books; but this is as real as can be and is definitely well worth the time and value to be included in any sightseeing list while in San Francisco. 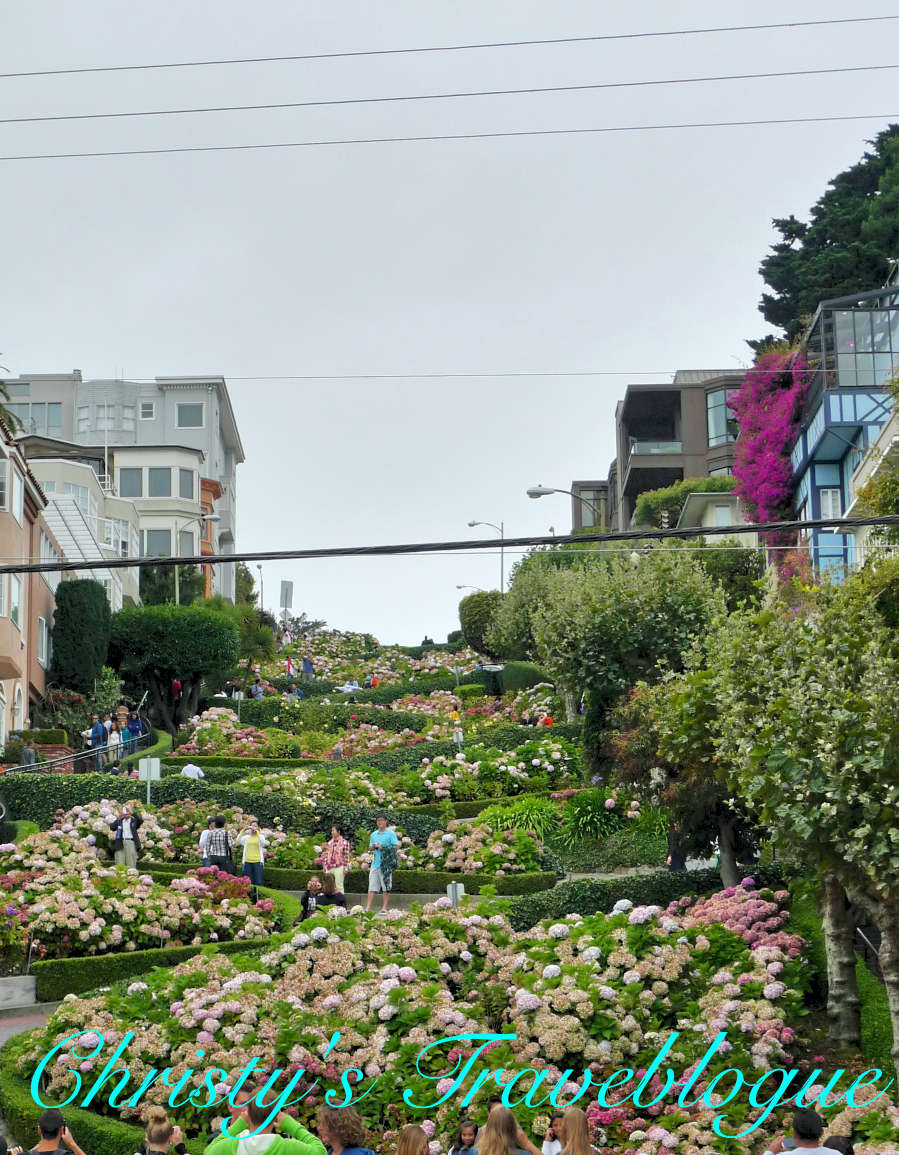 It is definitely a picturesque location that one can walk away and bring home proud, to stash in the collection of one of the postcard locations in San Francisco (and the world); and of course, a tick off the travel bucket list for unique locations around the world. 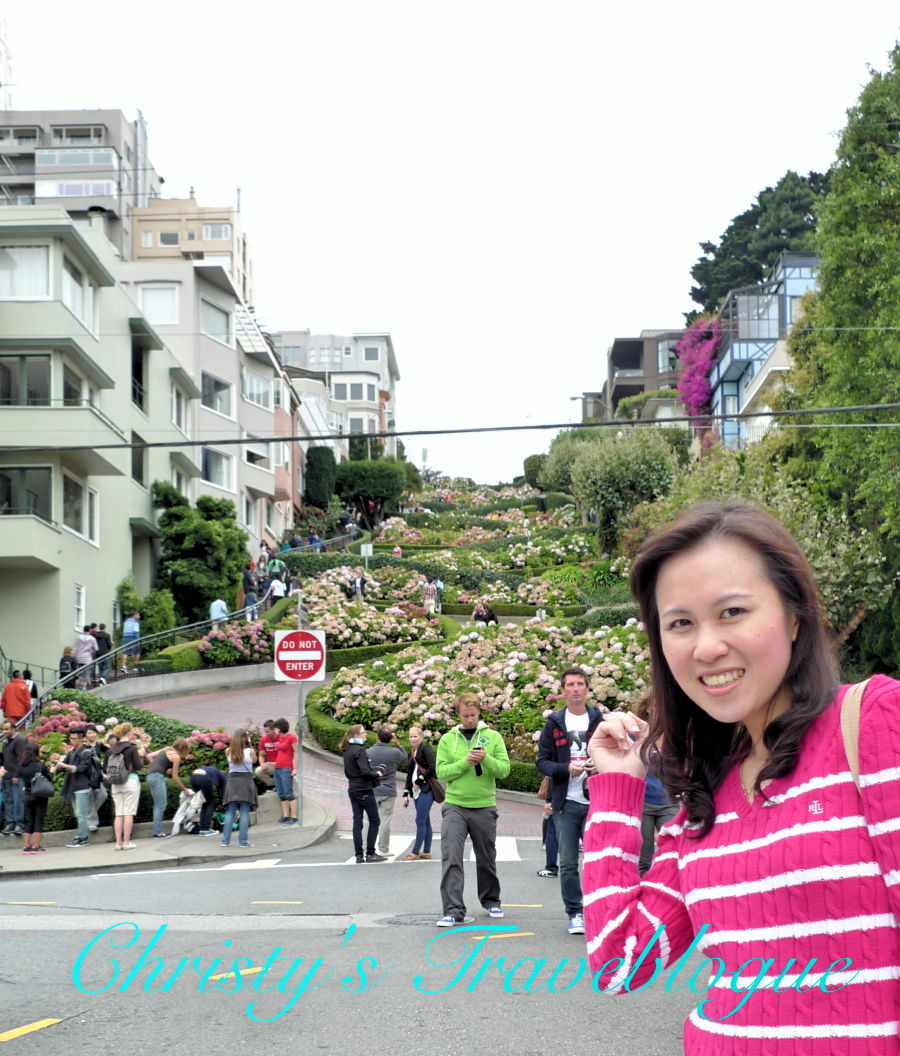 Posted by Christina Kim at 9:59 PM