From Rubbish Art to Masterpieces 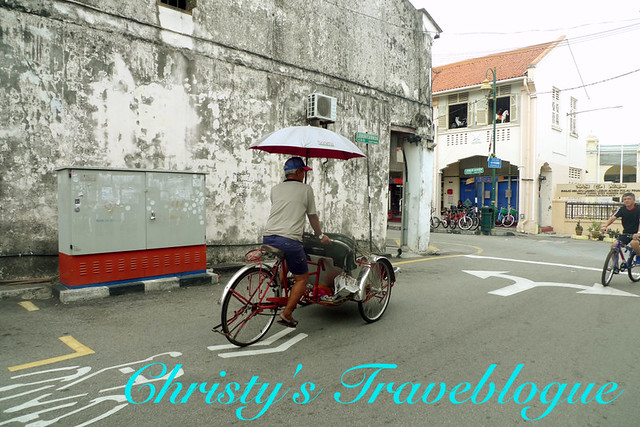 Stains of dirt and residues of the rainwater dripping down these once-white washed brick and lime plastered walls are evident, stripping the pre war buildings and shop houses of their former glory.
Perhaps they were once majestic in their past; concealing the untold stories as they stand in their place, bearing witnesses to the many events and even tragedies which unfold before them.
Today their dilapidated state is a sure giveaway of their age and sorry states, as they stand in the bleak part of the town, casting gloomy shadows of themselves as they are no longer at the prime of their youth nor are they the center of the limelight, but instead they are today sore to the eyesight, and no one would even take a second glance at them.
They are only known as the old buildings; thrown into the background as urbanization and modern buildings step into take their places and the only attention they are getting are from the people who call them hazards to the society and placed them on the list of demolition, paving that way for their blueprint plans of sky high buildings adorned with glass windows and ceilings in their places.

There is no escaping that fate, and they are screaming, weeping tears in silent protest of their own extinction; pained by the cruelty of their fates and also the fact that their contributions, deeds and reasons of existence have been forgotten in that blink of an eye. They are no longer important; that message was clear and the recognition of their past (or lack of) is clearly almost nonexistent.
They were nothing but just remnants of trash to be taken out to clear out the backyard; all in the name of modernization.

Their futures are bleak and they moan their distasteful eviction from the present but no one heard their cries. Their existence no longer means anything.
One man changed everything.
With a touch of his brush and creativity, he gave life again to these walls.
He saved them with his grace of painting and brought back feelings of exuberance and reformation to the town.
With just one brush.

A joint effort between the municipal of Georgetown and this budding young Lituanian artist, Ernest Zacharevic took on the bold challenge to transform the historical town, also the capital of the famous Pearl of the Orient, the Penang island located on the north of Malaysia, with just a few paintings to inject that fresh breath onto the yellowish pages of the town.
It started with six paintings; and the local council granted the artist the permission to begin his project, painting, on, get this, the old street walls.

The old dilapidated walls are the artist’s canvas for him to unleash his talent and creativity.
It is a winning situation for many parties, if you come to think of it; the town gets another identity and an overnight sensation of catapulted fame, the local authorities reap from the boost in tourism, the artist gets to showcase his talent and a chance at fame, the owners of the shophouses, well, get a fresh coat on their sorry walls, and the walls, are, now, priceless and saved from their intended evil destruction.

It was a huge success, probably more than the original plan.
Ernest Zacharevic proved to be an incredible talent with his strokes, and he had painted realistic and remarkably heartfelt depictions of the local scenes.
His paintings drew the locals and tourists from all over the nation and worldwide to throng the island in droves.
It was amazing, the way his paintings; his street art or murals, evoke emotions and memories of the local scenes which is perhaps, the very reason for drawing his audience (art or even non-art enthusiasts) to flock to each location of his art like opposite sides of the magnate.

From the “Boy on a Bike” to the “Little Children on a Bicycle” and the striking “Awaiting Trishaw Pedaler”, the location of these walls became instant tourist spots and dot the traveler’s map, topping the list of the places to visit, or must visit in Penang. 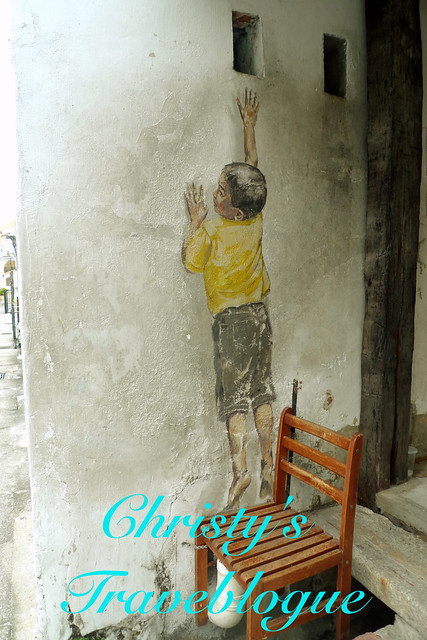 Another piece, "Reaching Up" found on one of the walls and have been featured in one of the Hong Kong drama

Already a tourist destination in its heydays due to the crowns of “Food Paradise” and heritage status (Penang is recognized and honored as a UNESCO Heritage Site since 2008), along with its longstanding tiara of being nicknamed as the Pearl of the Orient due to its many wonders (nothing could be better than that; in fact the island is almost unbeatable in its fame compared to its minute size on the map), the island continues to enjoy more attention worldwide and welcoming visitors from all over the world.
The spike in tourism delighted the locals and businesses continue to prosper, and there is no longer a difference in weekends and weekdays for there are always foreign folks on the island throughout the year.

The locals were the first to pay homage to these artistic paintings, of course, though there were also many who have not been. It is always as such, for the locals are always the comfortable in their own backyards and believe that they are always going to be there.
After all, it is their hometown, isn’t it?
Tourists are excited to stalk the spots where the wall art are located, and it became sort of an activity of treasure hunt, or rather, wall art hunt, as everyone follows the trail, preying on one mural after another.
Technology has definitely helped to spread the reputation of these street murals; with the creativity of poses and postings to social media accounts such as Facebook, Instagram, Twitter, and Pinterest.

The walls have definitely been restored to its former glory, though they have been reinstated with a new breath of identity altogether, with that coat of illustration and colors on their faces.
Well, at least, it did well to mask their fears and insecurities, and also the misery of their former selves.
The walls can now breath a sigh of relief, and continue to smile as they are now, right smack, thrown into the limelight and perhaps, they might now silently wish for a moment of silence, once in a while.

The surge in the overnight fame of the street wall art catapulted its artist, Ernest Zacharevic into stardom, as he rides on his new fame; holding his art exhibition on the island as well.
It probably also inspired many others to have a go at demonstrating their skills, transpiring the many more unknown paintings and murals to emerge on the street walls over time, and perhaps, at an alarming rate too. The growth of these murals makes it difficult for many to distinguish between the real McCoy from the decoys.
Perhaps there are many more Ernest Zacharevics out there, or they are just wannabes, trying their luck to be someone one day.
However controls are exerted, for unauthorized paintings on the public street walls constitute acts of vandalism and is a breach of public responsibility, and definitely, illegal by all means.

Once regarded as an act of vandalism; street paintings (or perhaps some form of beautified graffiti) on public street walls, are now given a new name in justice, with their contributions to the local tourism.
They are now known as Street Art/Mural.

Ernest Zacharevic has popularized street art, and given a fresh perspective to as he calls it, rubbish art, but he has definitely given them their due credit.
It is not just with a flick of brush, but it comes with talent and skill, and of course, that burst of creativity.
Let’s not forget about opportunity either, for there are so many talented people out there who remain unrecognized and perhaps underrated for they never had the opportunity.

Given the opportunity and the permission, rubbish or street art can become tourist and social media worthy of attention but remember, doing it on your own and without the right approval, it is still a crime and one is just asking for trouble.

Thanks to Ernest Zacharevic, these street art has unveiled the beauty of Penang to the world, through her very own eyes, or walls, if you may, of the simplicity and exuberance of the lives here, a secret well kept by the locals and now, proudly illustrated for the world to see. 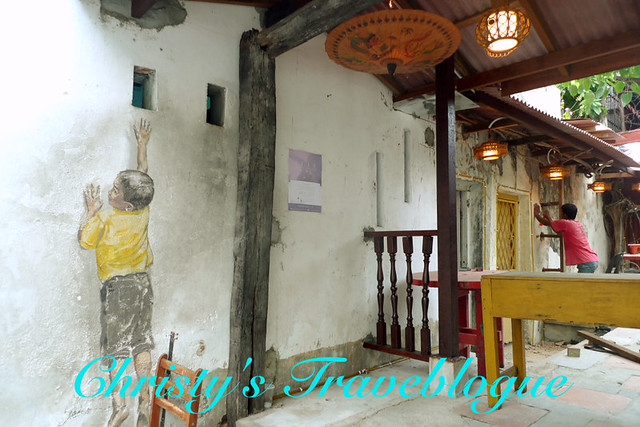 **Most of the street art by Ernest Zacharevic are located in the UNESCO Heritage site of Georgetown; mainly centering in the Armenian Street enclave, bordering  Weld Quay and its vicinity. **
Posted by Christina Kim at 2:27 AM